No, I have no idea what an LBGT sandwich is but I thought my sister especially would enjoy this! From the Coffee Bean shop at the Kolkata airport as we prepared to go to Varansi.

For the last few days I had had a nervous feeling in my gut about going to Varanasi.  David kept at me to read more in the guide book but it just made me more anxious.  There are many warnings–“not for the faint of heart;” “be prepared to see body parts floating in the rivier;” “cremations may be shocking to western eyes.”

Then we arrived.  They say Varansi will either be your favorite or the scariest part of India.  We think it might be right up there with our favorites.

There was quite a bit of rain when we landed, and during lunch, waiting to be picked up by our guide, it was pouring.  But when Dharmendra arrived at 4:30 it was just a bit drizzly.  The agenda was to see the Ganges action, including the evening Hindu ceremonies, and he offered to have us go into a building to watch from above, or take a chance on a boat ride–since the boats are uncovered, a lot of rain would have been a bummer.

We got out of the car to walk the several blocks to the river.  I remind you that we were quite enthralled with the Saraswathi action in Kolkata.  That was nothing.  The streets in Varanasi were filled, and I mean filled, with parading neighborhood groups, all young men, marching behind pickup trucks in which their statue stood, facing back at the following crowd, with a lot of cheering, drums banging, and general carousing–though there is no drinking thank goodness.  I cannot imagine these guys any crazier!  Many of them were also covered in powdered paint, seemingly different colors depending on the group (all green faces, then all blue faces).  They were clearly having a ball.  The streets were very muddy and of course cows, dogs, and goats were in the mix.  Boy, some of those cows are enormous. 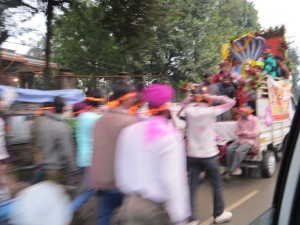 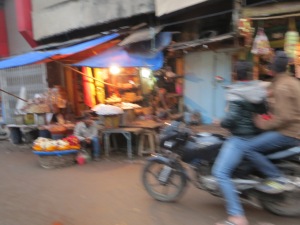 Varanasi is jammed with motorcycles.

We made our way down to the ghats and the scene seemed a bit calmer–most of the dumping of statues hadn’t begun yet as the first groups were just getting to the river.  Talk about people watching–you name it, it was there.  The crowds were big and getting bigger, very few westerners, but lots of celebrants from around the area as well as beggars, vendors, kids selling postcards, and so forth. 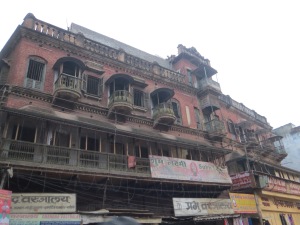 Ornate old buildings in Varanasi–a few hundred years old only, because the Mughals destroyed pretty much everything.

Our first view of the Ganges in Varanasi/Benares. 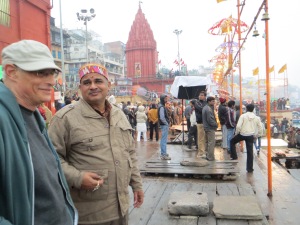 David was having a blast. 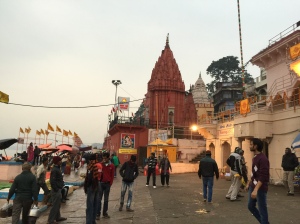 A group of costumed women and one man painted blue–not sure what they were doing.

Unlike Rajghat in Kolkata, here the clay statues are taken out by boat, to much cheering and banging, and then dumped overboard.

A view from Varanasi across the Ganges. There is a sandy edge of a km or more on that side–undeveloped because it doesn’t take much of a flood to cover it.

This is an enormous wall painting of Ganesh, looming over the ghat (steps to the river). 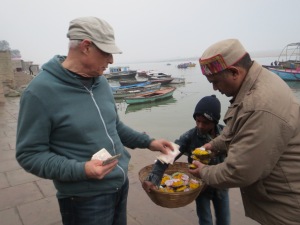 We opted to take the boat, and were so, so glad we did.

Our guide told a young boy selling the little floating candles that he would buy from him if the boy took an offering up the steps to one of Dharmendra’s favorite holy men.  He ran as fast as he could, gently handling the bills to the holy man sitting about halfway up the ghat stairway.  We bought three candles, arranged for the boat, and we were off.

So much has been written about this holy Hindu city, I am sure I cannot add a single new observation or description.  Our experience was absorbing, fascinating, and had its spiritual moments.  Dharmendra had asked us earlier if we minded telling him our religion–and seemed pleased to hear we are Jews.  As darkness fell he explained that as a born Brahmin he was able to sing the prayers for us.  And added, “I’m your Cohen.”  Seriously.  I said I wanted to place a candle on the water for my dad, who would be thrilled to know we were in India and that we would do such a thing for him–he had always been interested in my traveling life so how perfect would this be?  I was feeling really happy about doing it and happy thinking about my dad.  I stood up to take the lighted candle from Dharmendra and he started to chant a Hindu prayer.  The sound of his chant in a beautiful deep voice, the minor keyed droning that sounds so much like a Jewish prayer, and tears came to me in a rush.  I cried as I put the candle in the water, and though the surface of the river seems very still it rushed away on the current and was a speck of light in just a moment.

I got ready to put my dad’s candle into the water.

Now it was dark.  We reached the area where there are many cremations underway; there are 200/day here, day in day out; most take place at night due to the need to make arrangements quickly and the relative ease of doing all of this during the day.  You are permitted to take pictures from a respectful distance.  Dharmendra assured us of his confidence that observing these is not a problem for the mourners–they understand, he said, that people have come many, many miles to see these religious practices and “you can see better buildings at home.”  There were many boats drifting up against each other with tourist/observers, but those on the shore ignored us all.  The site is impressive, relatively quiet as it is some distance from the central ghat area, big and small fires as close as the edge of the water as well as up the stairs on outside plazas.  Each mourning group has one person wrapped in white–the chief mourner, often the oldest son.  Only men attend.  (When a child dies at less than 8 years of age, the body is instead wrapped in a white shroud, tied to a board, and taken out into the river where it is weighted by stones to sink to the bottom–and we did see a child’s body being so tied the next morning.) 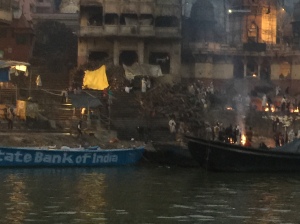 The fires are cremations.

We were rowed back to the central ghat where the evening Hindu ceremony was gearing up.  Many, many boats, most with 10 or 20 people in them, were bunching up in front of the action.  On each of two ghats 7 priests stood, ringing bells, swinging various forms of fire (large oil lamps on metal arms that reminded me of the shape of hacksaws, towers of lights that looked like Christmas trees, maybe a foot and a half high), chanting and perfectly synchronized movements.  The bells were very loud and the chanting louder–and many of the observers followed closely, clapping along with the faster chants.  No one, however, around us was actual singing the prayers except our guide, who sang along with everything.  Amazing?  Fantastic?  Moving?  All of this and more–plus, every few minutes another group of young men came marching down the steps with a clay statue, seeming bigger and bigger, loading it into an open boat, cheering and hollering in unison, and then, after a few more blessings, tipped it into the river.

Saraswathi after Saraswathi is carried down and loaded into a boat.

About the largest we saw.

The ceremony lasted about 40 minutes–then we quickly went ashore to beat the rush and walked back up to street level–where the parade continued.

(I am posting this now but will add video when we have a faster internet connection.  The combination of sight and sound is required to get even a tiny bit of the feel of the experience!)

As we made our way back to the car the parade of statues continued. 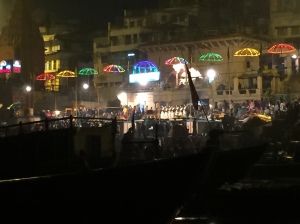