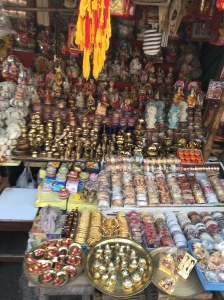 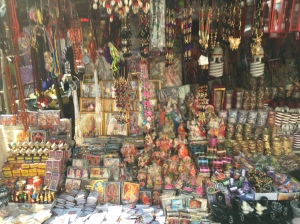 Lots of items for sale related to Kali. We bought a few for good luck.

Goddess of wisdom, riding her swan and carrying her musical instrument.

Vendors around the Kalikat temple. 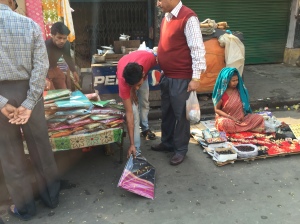 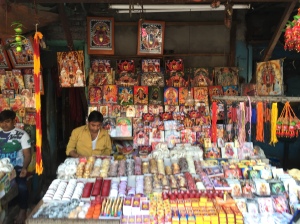 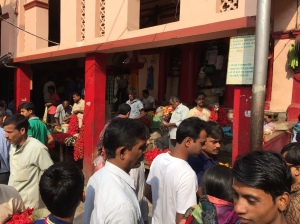 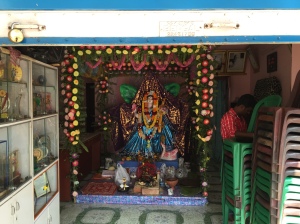 The Kalikat temple from outside…we hadn’t see the queue yet!

Sunday morning was our first hint of Kolkata heat…it was hazy in the morning as usual but by mid-morning the sun was out and we felt better in the shade.  By afternoon it was hot and we were sticking to the canopies over the sidewalk vendors.

We had a guide for half a day, and she took us first to the Kalikat Temple.  It being Sunday the place was a madhouse–all kinds of activity in the streets and continued activity for Vasant Panchami, the Saraswathi Puja festival.  Sidewalk shrines, marigold garland sellers, young women especially dressed up, though not quite to the extent we saw Saturday.  The queue to get into the temple was impossibly long, and in some places priests were blessing those in line in case they didn’t get in.  It appeared many people had come a long way to attend.  Since getting in was not possible our guide took us all around the outside instead, including the gate where they were taking goats in to be sacrificed.  We hurried past.  The meat is eaten by the family, having been blessed, etc., etc., but this was still rather uncomfortable to confront.  The variety of people in the street was amazing, from rather modern looking families, dark brown men sitting on the sidewalk in turbans and pantaloons, disabled beggars–a crazy scene.

We made a stop at the Victoria Memorial, an enormous building that was intended to be a bit reminiscent of the Taj Mahal (it’s not, really), and full of dusty exhibits and old pictures.  The surrounding English gardens are beautiful–not a speck of trash! 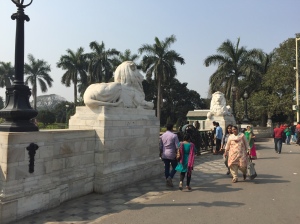 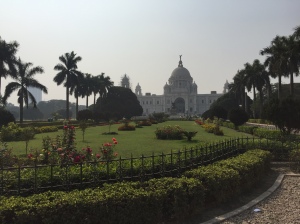 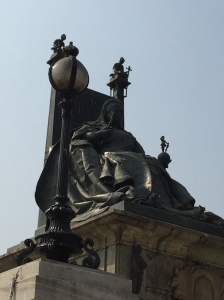 (I am going to post now but have a few short videos to add later to capture some of the sounds as well as sights of the festival.)

We drove down to the Ganges, our guide talking so fast it was hard to follow what it was we were going to see.  Well.  This is a spot where grieving families come at the end of the 13 days of mourning.  A small concrete open room is occupied by a priest who blesses those who come.  Men and boys who have lost a parent have their heads shaved right there on the banks and then walk into the water to bathe, and likewise women dressed in special white saris with red trim walk in as well, immersing themselves. Afterwards they change into clean clothes and they are ready to resume normal life.  It seemed like a mix of solemnity and, as men and women came out of the water, some measure of happiness, or perhaps relief.

Men have their heads shaved before a ceremonial bath in the Ganges.

The boy at the right is carrying a family Saraswathi into the water–returning her to the Ganges. 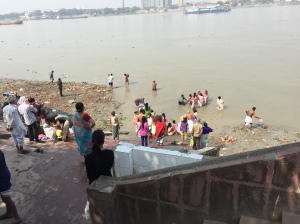 Ceremonial bathing and placing Saraswathi clay figures into the Ganges. Women go into the water in their special saris.

At the same time, there was a steady stream of men bringing the statues of Saraswathi to be offered to Mother Ganga–in other words, to be dumped into the Ganges to float away.  Solo men brought small statues which had been in home shrines.  Groups of men, singing, banging drums, and carousing in general brought large, and sometimes VERY large, statues requiring many hands to unload from pickup trucks, carry to the top of the steps, rotate 7 times, and then down the steps with much effort and into the river.  It was a wild scene.

Our guide dropped us at the Indian Museum, an odd hodgepodge of exhibits in a very old building, recently renovated we were told but not quite finished (many new signs pointing to non-existing places and exhibits, for example).  We were the only non-Indians there.  We were so strange, apparently, that in the bird exhibit a man came up to us to ask if his wife could have her picture taken with me.  Uh, sure!  Four, five, six pictures with various combinations of the women in the group were taken with much giggling and hugging.  We had not paid the fee for having a camera–otherwise David would have snapped a picture of me getting my picture taken with a bunch of strangers.  About that bird exhibit–there is a large case labeled “Birds of North America, South America and Europe.”  A big map, with stuffed birds on little shelves to show where they live.  For North America they had…a quail and a scarlet tanager, the tanager so old and dusty it was brown and grey.  Maybe if those are all you can get your hands on it’s better to skip that continent, yes?

We wandered back to the hotel, packed, and prepared to say goodbye to Kolkata.  Next morning we flew to Varanasi.