Our travel karma has been cooperative, but in Agra the weather was not.  We woke to a very thick fog, and fell back to our alternate itinerary of visiting the Agra fort, or, more accurately, fortified palace, first, hoping the air would clear sufficiently to see the Taj.

This was lucky, as we might have given the fort less attention than it deserves.  The way in is a short, curved roadway over the drawbridge (though no water or wild animals remain in the double moat), through the impressive gate, and a long walkway/road of corduroyed sandstone pavers (to keep the horses, camels, etc., from slipping) that slopes up into the fort proper, opening on a wide, flat space surrounded by, again, exquisite sandstone and marble buildings.  This is where Shah Jahan was imprisoned by his son, in quarters that gazed across the river to the Taj, Shah Jahan’s beloved wife’s tomb.  Today, a large portion of the fort is used by the Indian army, though the scale of the public parts of the fort are hardly diminished–it is enormous!

When thinly carved, the marble is translucent. 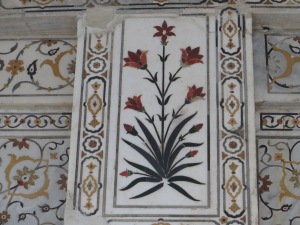 The inlaid decorations, and they are everywhere, have such a happy, light feel to them, and many of the botanical representations are identifiable–iris, rose, lily, and many others.

You really need a guide here or you might be lost for hours in the labyrinth of rooms, gardens, womens’ quarters, public and private “courts” where disputes were judged a la Supreme Court, lawns–and some dogs, a few monkeys, and of course parrots and other birds.

The fog seemed to be thinning a bit as we drove to the Taj.  One lovely thing about Agra–the hotel, Taj, fort, all within 5-10 minutes of each other.  SO different from Delhi.

You take a battery operated shuttle to the security gates, where the pat down was serious, segregated by gender.  And lots of rules:

They are so specific–no wine, but beer okay?  No books?  No candy!  So when David’s search revealed a cough drop it was confiscated.  He argued about the chapstick, though, and prevailed.

As we entered it was obvious that preparations for Obama are underway–the reflecting pool was being emptied by a score or more of workers who were sweeping and scooping out the last bits of water, and many others squatted in the lawn pulling clover and other weeds.  No matter, as the fog still obscured much of the Taj and the famous framed picture through the gate, with a majestic building reflected in a long pool was instead a cottony, white view of a distant, ghostly building where even the dome (which later appeared, hurrah) was invisible.

On three sides of the tomb–what we know as The Taj Mahal–are enormous sandstone gates, which were intended to, and do, contrast with the white of the Taj to lovely effect.  The one facing west is now and was built to be a mosque; the one facing east was a guest house;.and the main gate. 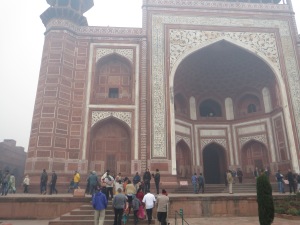 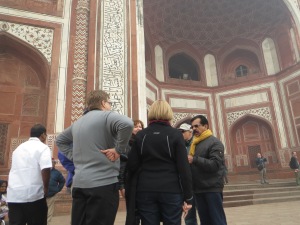 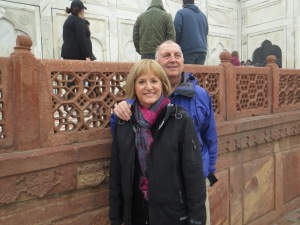 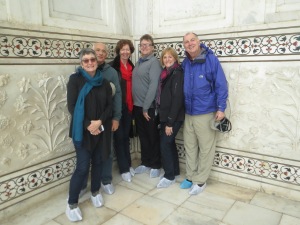 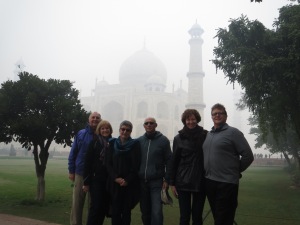 None of use had realized before that there are many inscriptions of the Koran around the exterior which add a very graceful border to the enormous entryways.  The marble is inlaid with carnelian (the red) which, when a light is shone against it, glows due to its crystalline structure.

The tourist section of Agra is relatively organized and, to western eyes, more typically city-like.  The surrounding area is the bustling hodge-podge we had seen in Jaipur and parts of old Delhi. 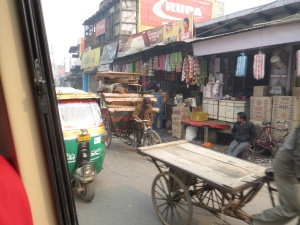 We left Agra to return to Delhi, a 3 hour or so drive along a private, elevated highway.  Most of the countryside is endless green farms of wheat, mostly, and overcome by the sights of Agra it was a restful trip with reading and dozing for all.  Suddenly our driver pulled to the side to point out wildlife in the distance–huge storks (below) and, a few moments later, blue bulls, which were difficult to photograph but they have horse heads (luckily I had my binoculars) and bullish bodies.

We ate at a lovely Mediterranean restaurant (the cuisine via India–I don’t recall seeing lemon grass and coconut milk on a Mediterranean menu before) where we feasted on roasted vegetables, pasta, mezze, chicken, and paella.  Speaking for myself, I fell into bed, dreaming the heavy, sleepy, can’t-seem-to-move dreams of the exhausted traveler.  Tomorrow we fly to Kolkata for five days of Freedom from Hunger-led touring and learning.

4 thoughts on “White on white”