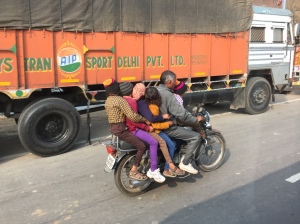 We set out on a cold and foggy morning, leaving the bustle of Jaipur for the open road to Agra, on which we saw–and often very narrowly missed colliding with–cars, buses, tourist vans, horse-drawn carts, donkey-drawn carts, camel-drawn carts, tractors, bicycles, motorcycles, goods carriers (commercial trucks) of various sizes, all brightly painted, 3-wheel taxis (motorized), 3-wheel taxis (cycles).  Bicycling men coming toward us in white turbans, grey blankets, and cloth-wrapped faces against the cold.  A blast of artificial sunshine as a woman in a saffron-gold sari disappeared down a cross road into the fog.  Long-haul trucks with open trailers, one painted with a lake scene and stylized flowers, all with artificial flowers stuck in the outside mirrors and long green tassels swinging from side windows, painted of course with instructions to BLOW HORN or HORN PLEASE.  (The honking is incessant, as apparently every driver must honk when passing, almost passing, or having just passed another vehicle of any kind.)  Trotting dogs, ears alert, and sleeping dogs curled up, playful dogs wrestling.  Two-toned crows with thick beaks.  Dangling strings of colorful packets of beetlenuts from every khoka (small commercial stand).  Red resin chairs in tight circles around small fires where men in turbans and blankets huddle in conversation.  Standing women in saris of every color, also in tight circles.  Sweepers, mostly women, bent over at work in saris of every bright color.  A young man in trunks, nothing else, washing his hair at a large caldron of water.  Small conical Hindu temples.  Silhouetted trees in the bright fog.

As we drove our van was filled with soft, slowly rhythmic chants to tabla and droning harmoniums. One of our group, having had very little sleep, dozed in the back, while others read.  On we went in the fog.

After a couple of hours we turned off the highway and headed  a few miles down the side road, coming to what appeared to be a tiny village, though our guide told us several thousand live there.  Our van stopped and there right on the road was an informational sign for Chand Baori, Abaneri, one of the oldest step wells in Rajasthan and built in the 8th or 9th century.  Inside the low entry and down a few steps is a living Hindu temple to Hanuman, the monkey god; the entire temple is perhaps 10 feet long, though clearly in use.  And the step well–how to describe it?  Twenty meters deep (about 6 stories) surrounded by an elaborate series of steps on all sides, and a colonnade on 3 sides where pieces of carved parapets have been numbered and lined up for restoration. 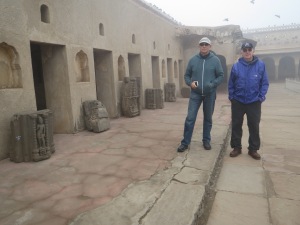 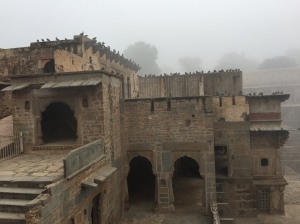 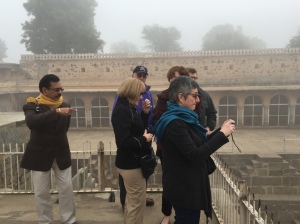 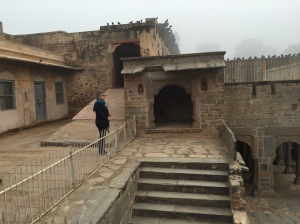 The contrast between this enormous and ancient public work and the tiny village structures which surround it was jarring.  With the help of our guide we were welcomed into one home, tiny, hazy with smoke, where two woman spoke to us, translated by our guide, about the bread they were making, two small boys looking up at us, wearing winter caps and feet bare.  David and I were startled at the close similarity to our experience in Chiapas, Mexico, where we were given lunch by a woman in her smoky, tiny home–and in both cases families living in a single room, adults and children sleeping together, cooking around an open fire in the center, and both with a small tv and a mobile phone.

The contrast between the very poor, tiny homes and the beautiful vegetable stands directly across the narrow road was equally jarring.  The friendly proprietors welcomed me to take pictures and pointed out and named each item, all the produce beautiful, clean, and appetizing–especially the red, red carrots. 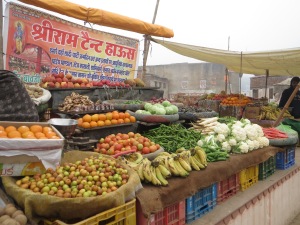 Our final stop before lunch and Agra was the abandoned Mughal city of Fatehpur Sikri.  We were happy to walk up the road in the cool afternoon past small herds of goats, the fog having dissipated, to tour this extraordinarily large abandoned city.  It took 12 years to construct and after 2 years of occupancy was abandoned, probably due to lack of sufficient water.  David and I were again struck by the similarity to our experiences at Mayan ruins in Mexico–the scale and expanse, the decoration, the engineering, seems impossible. 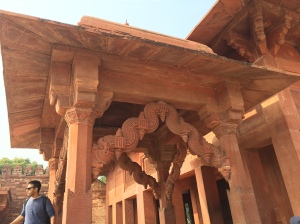 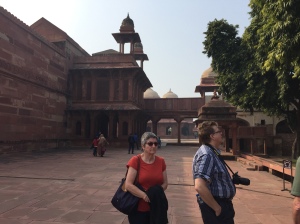 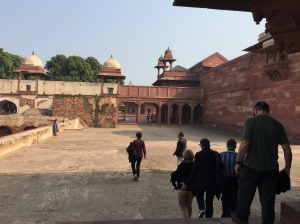 The carving–and, to me, the remarkable geometric precision and variety–is astounding.

This evening we went to live Bollywood, a local show which purports to tell, with considerable poetic license, a version of the story of the Taj Mahal.  The sparklers, balloons, and marching out of the Indian flag at the end capped a hilarious production.  Now, to bed.

2 thoughts on “Foggy Road to Agra”