Employing our excellent travel karma we woke to dreary weather—the day we would spend 5-6 hours driving from Delhi to Jaipur.  We checked out of the hotel and were on the road at 8am in a cold rain.

For several hours the drive was interesting but hardly picturesque, passing enormous high rises, Dell, Google, construction underway, construction partially finished and seemingly stopped, unfinished roads, hodge-podge intersections, too many cars and buses all driving with the same abandon as in Delhi. A disorganized boomtown—with million dollar apartments mixed with plenty of rubble and confusion. It is hard to imagine paying this kind of money for what must be a huge hassle just to navigate out of a parking lot and onto some kind of thoroughfare. The highway, Indian equivalent to an interstate, was utterly full of vehicles, mostly trucks of various sizes and most painted with flowers, Hindi, gods, and always with instructions to ‘honk horn’ painted above the rear bumper.

Gradually the construction gave way to countryside and we began to see livestock—cows, many herds of goats, water buffalo, a few pigs, a few chickens, a camel or two, the ubiquitous dogs, lots of monkeys along one stretch, sitting on top of stone fences eating, and vast fields of mustard. Every few miles a semblance of a village—rows of decrepit but bustling commercial enterprises of every type. Eating establishments with plastic chairs arranged out front, flower stalls, vegetable carts. 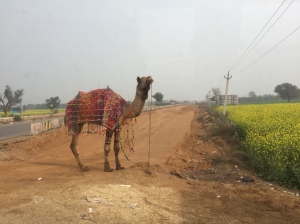 Traffic moved very fast, with amply horn honking and darting in and out by cars among the trucks which weave back and forth with no obvious recognition that there are lane markings. We saw one sign which said “lane driving is safe driving” but we wondered how they could possibly know this is true—lanes were no more observed on the highway than they had been in Delhi. The highway is divided, but periodically we encountered cars and trucks coming down the wrong way, apparently because it was obviously more convenient than driving on the correct side and turning into a side road. One short stretch, maybe ¼ mile, was a series of car and truck repair shops with various specialties, and so of course there were trucks parked along both sides, facing in all directions, for repairs, leaving one crooked “lane” for traffic to pass through.

At last we came to a fork in the road—to the right, Amber, straight ahead, Jaipur, the Pink City. We bore to the right and immediately were in a jumble of commercial activity, cows in the streets, an elephant, picturesque buildings, food stands, and temples, and, to the right, a huge long mountain with stone walls snaking up and an enormous fortification complex at the top.

The road became narrow and winding, lined with bougainvillea. Rather suddenly the view in all directions was both bustling with families and commercial establishments and extraordinarily picturesque. A large lake with an abandoned palace in the center. Strips of parks with both people and monkeys. And then we were in Jaipur proper, a large, open city with a specific architectural style, salmon buildings with white ornamental trim which stretch for many blocks, giving the city a particular personality very different from Delhi. 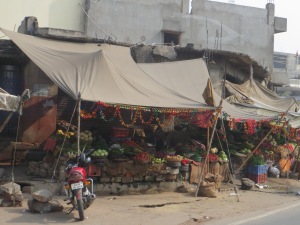 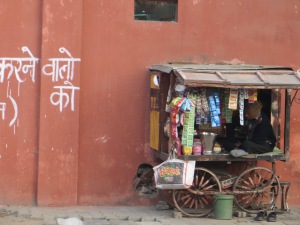 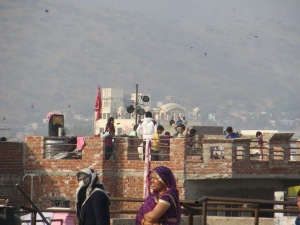 Our first stop was at a textile and rug complex, and as we got out we noticed many kites in the air. In the villages near Jaipur we had seen scatterings of people on their rooftops flying kites, and it was the day of the Kite Festival so we had expected to see whatever turned out to be a kite festival—we really had no idea what that meant. Trees around the parking area had kites stuck in the branches. A few hours before the rain had stopped and it was almost sunny and pleasantly warm. After a block printing and rug making demonstration we went inside to do some business. How clever the sales technique of offering Kingfisher beer, paneer tikka and chick pea pakoras to all of us as we sat down to the rug presentation—rug after rug brought out for our inspection as the men drank beer and we looked and looked…and bought. A large rug for the dining room, a runner for the kitchen, and our fellow travelers succumbed as well. Finally a few textile purchases.

Menfolk were getting tired. 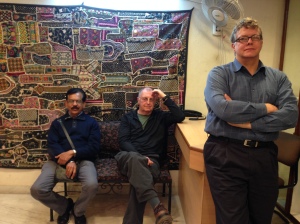 And then as we concluded the buying part of the day we were invited up to the roof. And NOTHING had prepared us for the site. On every roof in every direction, families were flying kites—the sky was full! And noisy–music, shouting, laughing; hooting when a kite went down—a citywide kite party. Monkeys in the trees, fallen kites in the trees, women in colorful saris, children dancing and hollering, picture taking, kite flying attempts (by us), actual kite flying (by our hosts)—it was glorious, exciting, colorful, thrilling, and after maybe 30-45 minutes we finally went back down to the van and off to our hotel. 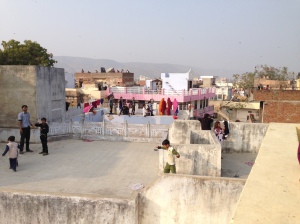