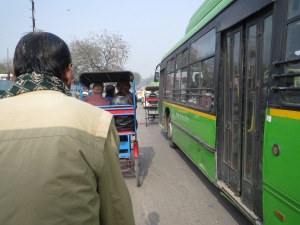 To journey up the hill to the largest mosque in India, of course you take a bicycle-powered rickshaw. And then try to keep breathing.  Right into the impossible traffic you go, surrounded by honking horns, busses, three-wheeled cabs, everything and everyone going as fast as they can, while sidewalk merchants sell dental services (“Over there–they make teeth” our driver explains as we pass one, two, maybe ten different men sitting on blankets next to propped up handdrawn pictures of dentures), clothing, vegetables, handbags, tea, like every street market but louder.

The Mosque itself is an enormous plaza with minarets and domes, the interior a surprisingly small colonnade, rather lovely in proportions but fairly plain.

Down we came in our bicycle rickshaws to be dropped at the Red Fort.The Red Fort looks like a huge fortification, but inside it is a broadly dispersed set of buildings and expanses of lawn. Architecturally various with both marble and sandstone buildings, long open terraces, and, sadly now, remnants of an elaborate water system which had flowed from building to building to provide bathing facilities and fountains. Almost as interesting as the complex of buildings were the Indian tourists, beautifully clothed women in extraordinarily bright saris, men in colored turbans open in the center like cloth crowns and white draped pantaloons. We strolled from building to building as our wonderful guide Anil explained the history of each. 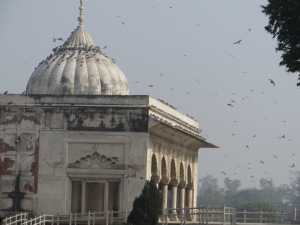 I finally was able to capture a photo of another great flock of kites swirling above.

Tucked here and there on several of the buildings were delicate inlays of flowers and floral arrangements. 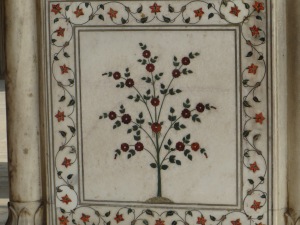 On our way to lunch we made a short stop at Mahatma Ghandi’s memorial, the site of his cremation. A path leads around the simple stone platform, decorated with rosettes of fresh marigolds, and the eternal flame. The park in which it sits is also the site of the cremations and memorials of many key figures since independence, prime ministers and others, and the park itself is many acres, peaceful and quiet.

Another delicious lunch, where we again had paneer tikka, a food that is becoming the symbol of our love affair with Indian cuisine.  Pindi. Go there if you are in Delhi.

Last stop of the day was to the Akshardham Hindu temple, built miraculously in 5 years (“it was supposed to take 40”) and to my inexperienced eyes the very essence of over the top Hindu kitsch. We have no photographs as visitors are not allowed to take anything into the complex (no phones, no cameras) and we each were carefully and thoroughly searched on entry. From our itinerary: “Built without steel, it consists of 234 ornately carved pillars (ornately is an understatement), 9 ornate domes, 20 quadrangle shikhars…and 20,000 statues of India’s greatest sadhus, devotees, acharyas, and divine personalities.” Not to mention a frieze around the entire base of the main building comprising every kind of elephant, elephant family, elephant story, elephants being worshipped by rabbits, elephants fighting crocodiles, elephant parables, each elephant carving weighing many times that of an actual elephant. And a food court, gift shop, lotus garden…it is Hindu Disneyland.

After a grueling drive back to our hotel we fell into bed.

3 thoughts on “A mosque, a fort, a memorial, a temple”