Time to leave lovely Sevilla.  We had an early bus to Granada, 8:30, and had some anxiety about the long walk with all our stuff and the changing weather. Córdoba had been lovely, really a perfect day, but Thursday promised rain.

Luckily we had had a kind of revelation coming back from the train station when we returned from Córdoba. When we had arrived in Sevilla we were so totally disoriented as to the layout of the city that we had not completely understood that our Airbnb was just like two short blocks into the old city. In other words we were two short blocks from the modern city, the one with cabs and wide streets. When we came home from the train last evening it all made sense, and handy to know because as we crept out of the Airbnb it was raining quite hard and happily we knew a cab would be easy to find and it was.

The bus was full and luggage space inadequate, it rained the whole way, and the bus took about 45 minutes longer than scheduled. We both were a bit queasy when we got off, and the city was still wet with rain spitting on and off. We got into a cab right away, and right away we felt so much better as our driver was a delightful conversationalist and though he spoke very rapidly I was able to keep up as we discussed Spain, the US, intergroup stresses in both countries, the environment, tourism, gosh, I cannot remember what all we explored. I was ecstatic that my ability to communicate had improved so much! Turns out he was from Córdoba so we talked about what we had seen there, how it was different from Granada, etc. I think the ride was about 15 minutes weaving through the complicated streets of Granada. It was raining harder when we got out. Our hotel was in a pedestrian zone so we had to walk into the square and even with his directions we were confused as we stood against a building juggling phones to get a map up. Well, Hotel Los Tilos was literally 15′ from where we stood and we hustled in. 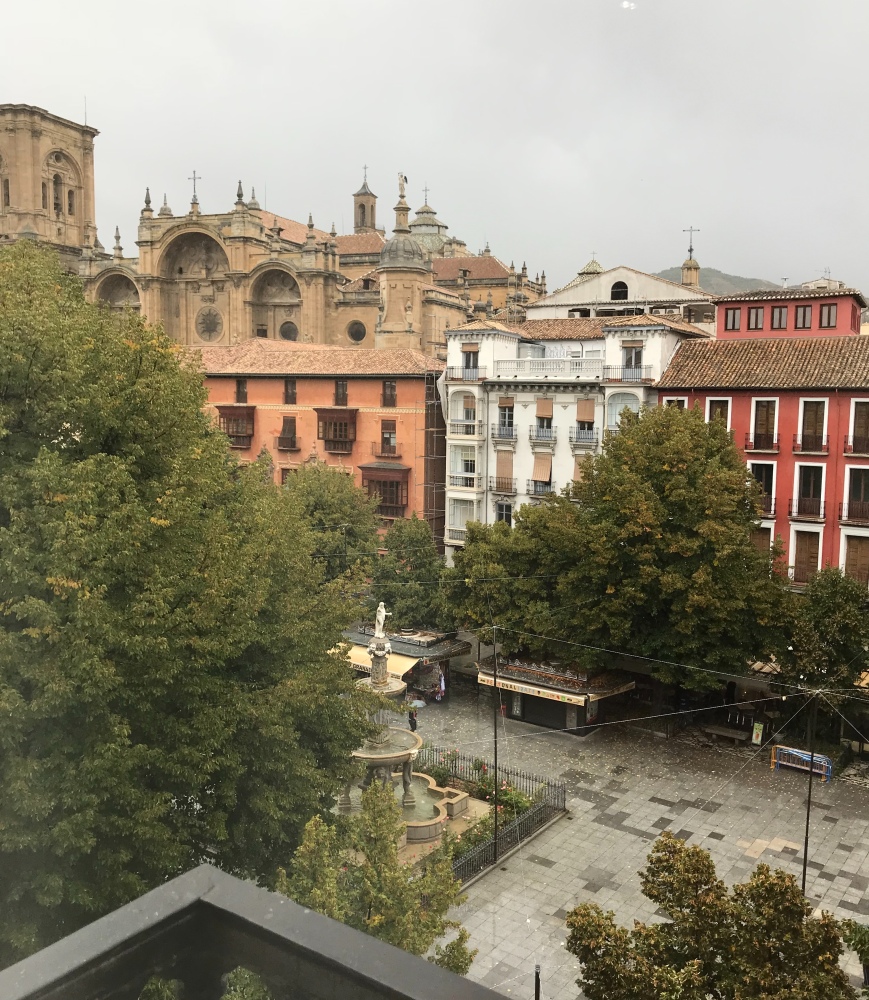 It was actually nice to be in a hotel, our only one of the trip, because we had a bathtub! We both took two baths over the two nights we were there! While the hotel was fairly bare bones it felt like a luxurious return to the 21st century after Sevilla, and our view out on the square delightful, with The Alhambra in the distance and the cathedral right across the way.

We needed food and a walk. Food was at Los Diamanté’s, a 5 minute walk and so good we had lunch there again the next day. A modern, slightly manic place with long shared tables on one side, bar seating on the other, and an open kitchen in back, waiters running to and fro shouting out orders to the kitchen. 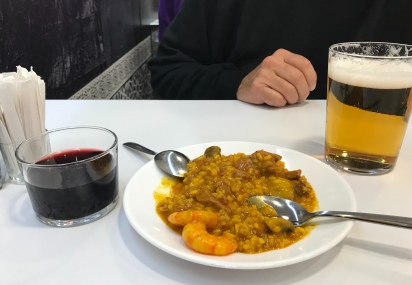 The place was kind of empty when we arrived, as it was only noon, but within 15 minutes it was full and fiesta-like. We were so hungry for vegetables and they had something translated as “buds with garlic” and another of marinated tomatoes. We ordered both. Buds turned out to be little, maybe 4″, romaine heads, sliced top to bottom and doused with a marvelously tasty vinaigrette loaded with smaller-than-minced dark brown garlic. I think the garlic was sautéed, drained, and added to the vinaigrette as the taste was very fresh and not at all bitter. The tomatoes were icy cold and crisp, also small, with oil and vinegar. Absolutely delicious. And a perfect balance for the mixed fried seafood and intensely flavored,yummy razor clams.  This all followed the Spanish rice that came with our glass of beer and glass wine of wine order.

We returned for lunch the next day…and had probably the plumpest freshest mussels possible.  And the rice again… 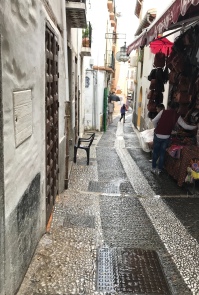 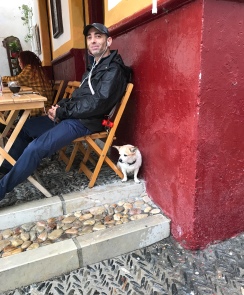 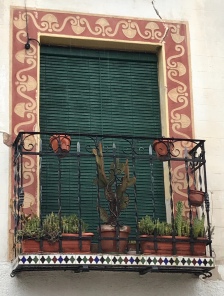 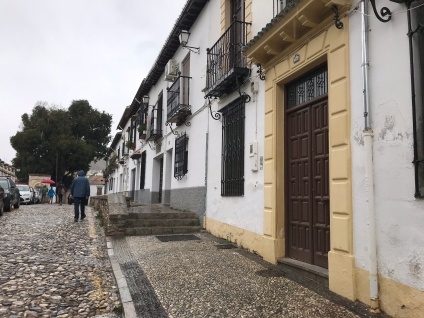 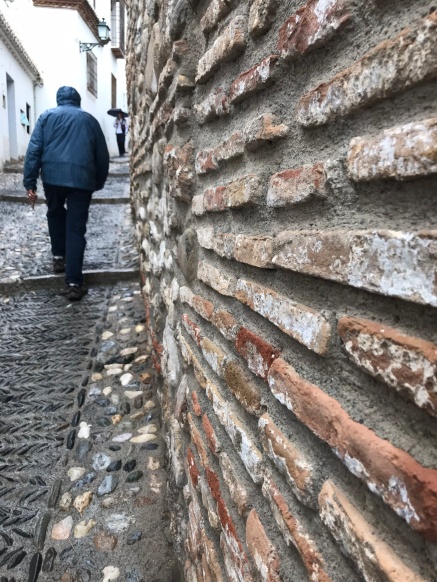 Well fortified we headed out into the rain for a walk through the Arab quarter, up winding cobbled streets, almost entirely pedestrian only, staying clear of the rainwater rushing down the middle. The cobbled paving was well designed to drain quickly leaving the sides pretty passable. We had to take care but it wasn’t especially slippery thank goodness. Up and up we went, to a puerta at the top opening into a small square, so pretty.

We were pretty wet when we got back down but took a quick tour through the cathedral. The audio tour was oppressively Catholic, with rather tedious and extremely religious explanations of how each nave celebrated a particular incarnation of La Virgen. The place is enormous, shown vividly by means of a scale model. The bell tower is, however, rather stubby with no actual bell, explained in the audio tour the result that the “planned third section” was abandoned due to “stability problems.”

Thoroughly chilled after the cathedral we headed to our room for hot baths. Heaven.

Granada is known for its unique custom of free tapas with each drink order, rotating through the tapas of the day. We took full advantage that evening with a visit to La Vinoteca, eating the food that appeared as we each enjoyed several glasses and finishing with a salad off the menu of mixed greens, mango, avocado, and very sweet and flavorful shrimp, with teeny tiny squares of crispy bacon adding a surprising smoky-salty note. I want to try this at home, but it is very hard to find shrimp of that quality so this may remain a happy culinary memory only.

No one goes to Granada without visiting The Alhambra. I was amazed to find it so close to the center of the city and also amazed at how very steep the walk is, through a true forest (not a manicured park) filled with birds none of which I could see in the tall trees. Up, up,and then you are there, an ancient walled castle/palace/fort with extensive gardens and multiple buildings of various eras. 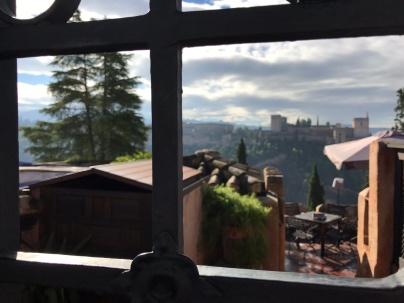 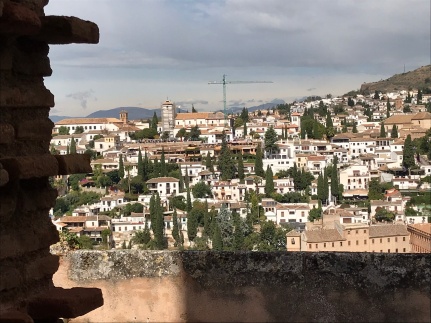 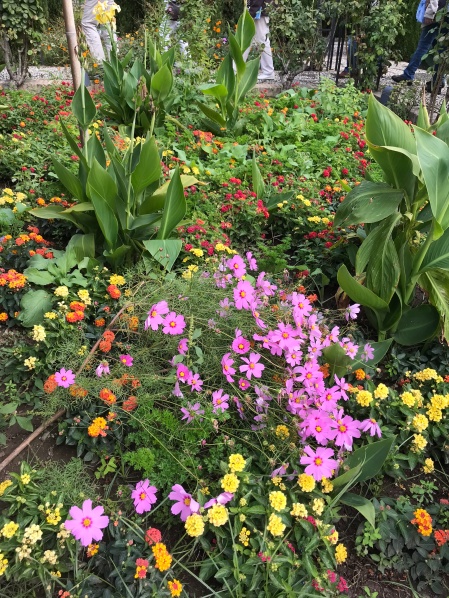 Like La Mezquita it combines Moorish and Christian-western influences and spaces. Unlike La Mezquita the Christian rulers built their palace rooms right into and indivisible from the Moorish rooms. It is enormous. We walked several miles as we of course went to every building and then through the Alhambra museum, fantastic even to our over-stimulated eyes and minds. The only thing we skipped is the reportedly uninteresting Bellas Artes museum.

We had train tickets to Madrid leaving around noon and we knew there was a bus bridge to the high speed train. The train station is right in the city, only a 25 minute walk from our hotel, so even though we would have all our stuff we headed out on foot. A boring walk but pretty easy. The station was a bit shocking after the various other terminals and stations we had been in. It is a smallish building with inadequate seating and nothing else. The room gradually filled up, suddenly there was a long queue, our tickets were gruffly inspected and we were divvied up among several buses each bound to a different station. Ours was an hour or so trip into what seemed the middle of nowhere, no town in sight, just a new station with several high speed tracks. We had seen the tracks for much of the bus ride, elevated through the endless olive groves. An hour later we were headed into the Córdoba station, so familiar from our earlier day trip from Sevilla.

I went into the small tienda that sold products of Espana to chat with the woman at the counter whom I had enjoyed talking to when last there when buying a few little gifts. We had shared a laugh when a large, unsmiling man had come to the register to pay for a bottle of beer (yes, you can buy a beer just about anywhere). He looked and sounded so grumpy I said to her when he left that he really needed a beer!

She remembered me and I told her we were leaving for Madrid and then home. We talked about our dogs (she has three), the tragedy of abandoned dogs, how much we loved them. She asserted “dogs are better than people” and we shared how sad we were when our dogs died. She insisted Spanish people are not dog lovers as there are so many abandoned dogs, and we commiserated about our respective societies’ failures. Then David and I had to rush down to the platform as we had been startled when last there at the approximately 30 seconds’ pause of the train for new passengers.