Monday morning breakfast at the lovely Kenilworth Hotel was the first step in our transformation from a little band of six to a complicated group of twelve, a mix of Freedom from Hunger (FFH) staff, trustees (3 of us), friends of the FFH family, and new inductees into the FFH circle of admirers.  We started the day with a meeting with local FFH staff and our president and CEO, Steve Hollingworth, who oriented us to the week, provided a rich background on the organization, its place in the microfinance world, and the status of the fight to end hunger.  Please, if you have something to give or want to know more, go immediately to www.freedomfromhunger.org.

We visited Bandhan, a complex company/organization which is primarily a bank, newly licensed as a full service bank, which has grown over the last 14 years into one of the largest microfinance entities in the world.  The associated NGO we are here to visit operates their health program, MAHP (Microfinance and Health Protection), started with the support of Freedom from Hunger several years ago, and which Bandhan has grown considerably on its own thereafter.  I won’t try to describe MAHP here–please see https://www.freedomfromhunger.org/what-we-do. 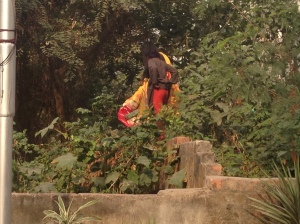 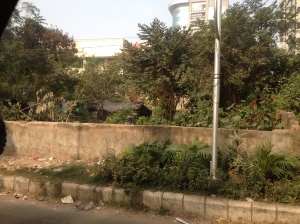 The Bandhan offices are in a modern building, but directly across the street is a small field with 3 or 4 tents.

At the Bandhan offices we were privileged to meet with Mr. Ghosh, their founder, CEO, and continuing inspiration.  A very soft-spoken, elegant man, he told us about his journey to begin Bandhan and his vision going forward.  My description of this experience is easy:  Wow. 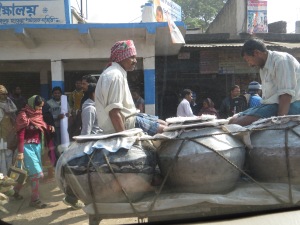 These large steel containers have live fish going to market. The man sitting in the back is swishing his hands in the water to keep it oxygenated and the fish alive. 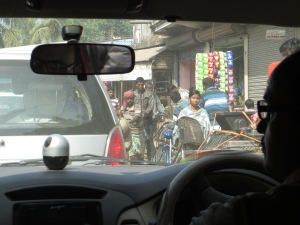 This gives only a hint of the crowd. We attracted some attention because we were in minivans, not the typical mode.

The next morning we trekked into the countryside to meet some of the people who deliver these services and some of the women who benefit.  We split into 4 minivans, accompanied by Bandhan folks, and sped out of Kolkata into village life.  What a ride.  Horns honking constantly (our driver favored a 5-honk sequence which he employed unceasingly and to no apparent effect), racing down a rutted, narrow, 1 and 1/2 lane road at its widest, through bustling crowds of walkers, bicycles (many), and the assorted 3-wheelers both motorized and human powered, as well as the occasional full size bus and large truck. To survive as a non-Indian you must simply give yourself over to the experience and remember that no one wants to get hit, that they have an uncanny ability to swerve within inches of obstacles and each other without stopping, and that it seems most days, most of the time, it all works out.  Indeed, we had no disasters.

A rather plainly painted truck. 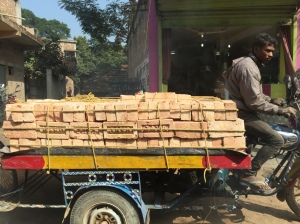 A furniture factory. If you ever suspect the rough-hewn pieces you buy in the US are faked, you are wrong.

Along the road we not only saw the small shops and snack stands, but also tiny workshops where manufacturing was underway–wooden boats, wooden furniture, and metal bedstands.  As well, piles and piles of building materials.  Bricks (which they not only build with break up to form gravel–as there is no gravel naturally in this region), logs, lumber, bamboo.  Building is constant, and it seems the majority of houses and other buildings are unfinished.  Bamboo scaffolding very common, often with no discernible activity.

The countryside periodically opens up into broad fields–we finally saw where a lot of that cauliflower comes from–as well as large, shallow ponds used for shrimp and fish farming.  We saw many cauliflower trucks being loaded, 5, 6, 10 rows high, with men on the top catching cauliflower flung up from the side of the road.  In between the fields and ponds were children playing, including two boys playing badminton, dogs, cows, goats–as in the city.  The road is in rather horrific condition, at times so bad the cars actually slow down (!), and driving on the shoulder necessary to pass in many places.

Periodically the road opens up into broad fields with livestock and cultivated fields. 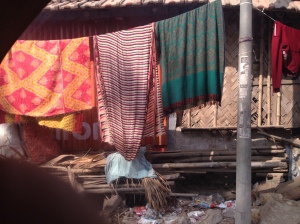 The scourge of garbage–plastic bags and cans. What at first looked like it might have been the result of a tipped truck was just a block of sorted and bagged recyclables (we hoped).

Not uncommong–bicycle-powered cart piled with chairs.

Plaster images of gods for sale. 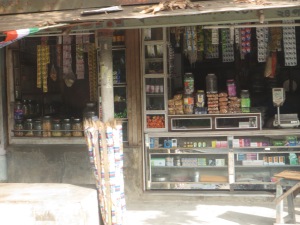 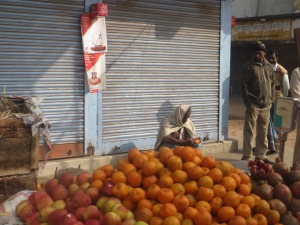 We finally stopped at a village, the name of which I have been unable to discover.  Here we had three encounters–we visited a home with a community health worker and her client, a 21-year old woman who is about to have her second child; a micro-credit group who showed us how they manage accounts and talked about their businesses; and a visit to one of these businesses, a home-based and thriving enterprise where the woman entrepreneur and her husband distribute printed fabric to be hand embroidered by women in their homes, and sell the finished products in turn. 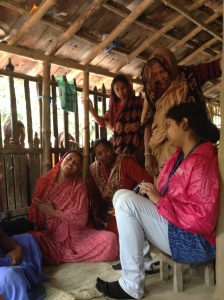 Sitting on the veranda talking with the community health worker, client and some of her family.

Client and her 3 year old son. 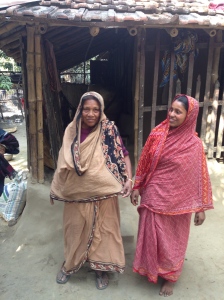 Client and, I believe, mother-in-law after our meeting.

The visit to the pregnant woman was in her home, where we sat on woven mats in a sort of veranda around the core house, where 7 people live.  The “veranda” is bordered by a rough wooden fence on which they had hung a lot of clothing to dry.  As the meeting proceeded a larger and larger crowd gathered outside, men, women, children, babies, and so they could see better they began removing articles of clothing and flinging them up on the roof.  We were a major entertainment. You can see them in the picture above on the right.

Everywhere we went we accumulated an entourage of children, who were delighted to walk and talk with us, have their pictures taken (and took ours on their mobile phones).  One young man, who had learned some English in school, engaged me in a serious conversation of sorts–he is 12 years old, he has two brothers, has learned English in school.  One of the kids gave me a candy–“Tip-Tap”–a hard and rather spicy, sweet-sour treat, and they loved that I ate it and another child quickly reached into her pocket and gave me another.  Steve ate one and mimed being struck in the heart, staggering and making faces, which everyone found hilarious. 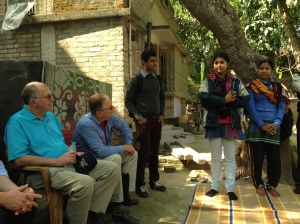 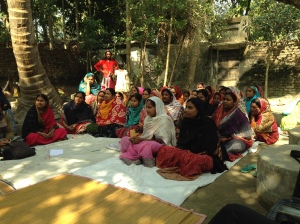 Probably the most inspiring moments were when we visited the credit group.  They were thrilled to see us, and told us a lot about their businesses–fish farming, a beetlenut stand, others.  At the end of their meeting one woman stood up to say “We have seen white people on television, but now we have seen you in person!”  It was a joyful meeting, where clearly the women are closely bonded and grateful for the opportunity to borrow (many times over for some of them) to continue to expand their businesses.

After the meeting we walked deeper into the neighborhood to visit a woman’s fabric business which she operates out of her home.  She has been in business for 14 years, using microcredit loans for the last 9.  She manages the manufacturing–distributing printed fabric to women who hand embroider it, keeping the books, etc.,–and her husband delivers the finished goods to their vendors.

A very poised (and beautifully dressed, perhaps for this occasion) businesswoman explaining what she does and how her business has grown.

Walking back through the village to visit the home-based fabric businesswoman and her family.

Our FFH guide, Alok, translating for us.

Because the area is seasonally very wet, in many parts of the village the walkways are somewhat raised, bricked in herringbone patterns, and in a kind of grid (in that there are a lot of 90 degree turns) circumventing stagnant pools, most of which dry up each year, to fill again in the rainy season.  Houses range from wooden frames with burlap or other material as walls, to 2 story plastered brick painted in bright colors.  Mostly the former. 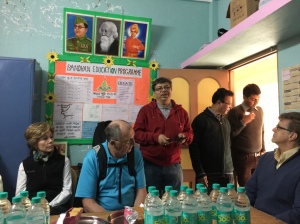 We met and ate our packed lunches at the Bandhan office.  They could not have been more hospitable and welcoming.  We were happy to see FFH education and technical support continue to have an impact.  As one of our trustees, an economist said afterward, “The evaluation studies and statistics are all very nice, but being here all I can say is ‘this stuff works!””

We wrapped up the day at a monthly Health Forum, where we observed a lesson on diarrhea, an enormous, chronic problem due to lack of public and private hygiene, and about which we know much more than we did when we started (we have now attended multiple different sessions of training on the topic).  Personally, I slept in the van, as I came down with a horrible head cold–but David attended and took a few pictures.  Huge crowd, as you can see.  This was only partially because we were in town–this is a series of 22 monthly village-wide forums, using methodologies that FFH introduced, and which Bandhan has taken forward and expanded. 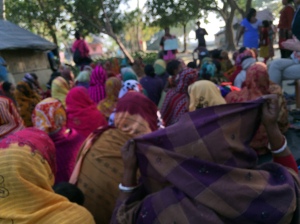